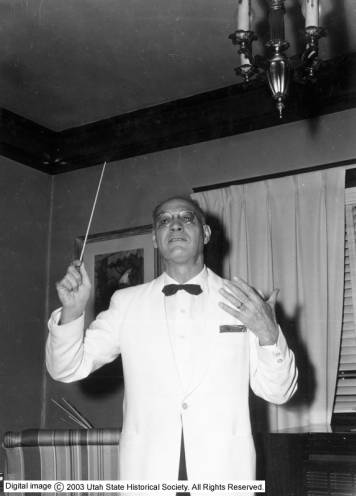 The development of the arts and the enhancement of the cultural quality of life in Utah owe much to Maurice Abravanel, Music Director of the Utah Symphony for more than three decades. A true internationalist, Abravanel was born in Greece of Spanish and Portuguese parents in 1903. His early life was spent in Switzerland and he studied in Germany under Kurt Weill, who profoundly influenced his professional life. Abravanel first conducted an orchestra at the age of sixteen in Switzerland. His conducting abilities soon placed him before the orchestras of several renowned opera houses in Europe, including the Berlin State Opera and the Paris Opera. He spent two years in Australia, doing much to influence the growth of symphony orchestras there. At the age of thirty-three he was engaged to conduct the Metropolitan Opera in New York City, being the youngest conductor at the Met at that time. Abravanel then turned his talents to Broadway, where he enjoyed great success as conductor of all of Weill’s American productions.

At the age of forty-four, and with such vast experience behind him, Abravanel knew what he wanted to accomplish—to build a permanent symphony orchestra of his own. In 1947 he accepted a one-year contract to conduct the fledgling Utah Symphony. The local mountains and the symphony orchestra were both to his liking, and Abravanel stayed, eventually maintaining the position of Music Director for thirty-two years. The Maestro retired from the podium in 1979, but he remained active in the world of music and in Utah’s cultural community until his death.

Under Abravanel’s nurturing the Utah Symphony grew from a part-time community ensemble to a symphony orchestra of worldwide renown. He molded the local character of the orchestra by importing very few artists from outside of Utah. He fiercely defended his musicians, helping them achieve full-time professional status. For years he lobbied for a permanent home for the orchestra, equal to its reputation. Ironically, while he was most influential in the building of Utah’s acclaimed Symphony Hall, renamed Abravanel Hall in his honor in 1993, he never raised his baton there, retiring the season before its completion.

Abravanel was dedicated to bringing great music to as many people as possible. He led the orchestra on four successful international tours as well as on tours throughout the West and to cities throughout America. He brought the Symphony to prominence through recording contracts with Vanguard, Vox, Angel, and CBS. He is the only conductor to have recorded all the Mahler symphonies with the same orchestra. Many of the more than one hundred Abravanel/Utah Symphony recordings are considered classics. In addition to his dedication to Utah, Abravanel directed the Music Academy of the West in Santa Barbara, California, from 1956 to 1979. Starting in 1981 he has taught conducting at Tanglewood where he has been appointed artist-in-residence for life. From 1970 to 1976 Abravanel served on the National Council of the Arts. The Maestro also served as the vice-chairman of the American Symphony Orchestra League, receiving its most prestigious Golden Baton Award in 1981.

Among his many awards and honors, Maurice Abravanel received a Tony Award for “Regina” as well as several Grammy nominations for Utah Symphony recordings. He received honorary doctorates from many institutions, including the University of Utah, Utah State University, and the Cleveland Institute of Music. He was awarded the first annual Richard D. Bass Achievement Award in 1987 and the National Governor’s Association Award in 1988.

Maurice Abravanel said that he would like to be remembered first as one who served his community. He excelled in that commitment—raising the quality of life in Utah and influencing millions through his musical talents. Maurice Abravanel died in Salt Lake City on 22 September 1993.

Music director of the Utah Symphony for more than three decades, Abravanel converted a community orchestra into a nationally ranked symphony. A tireless promoter of community support for the musical arts, Abravanel set a standard of excellence that prompted a performing arts renaissance in Utah.