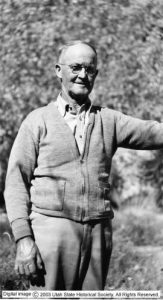 A road to scenic southeastern Utah was one of Arthur Chaffin’s accomplishments.

Although Glen Canyon gold mining was his first love, Arthur L. Chaffin made impressive contributions to his native state as a road builder and ferry operator as well as a boatman and Indian trader. His construction of a road from Hanksville to Hite, which he then linked in 1946 with the road to Blanding by building the Hite ferry, opened up the scenic delights of southeastern Utah to automotive tourism.

Born in Cedar City on February 13, 1884, to Maria Jane Wade and George E. Chaffin, he began his mining career at age 12 when he joined two older brothers on their claim just below Hansen Creek in Glen Canyon. He undoubtedly learned his riverbank engineering skills from them, hauling heavy equipment up and down the river in various improvised motor and current-powered boats.

While still a young man he was hired as a watchman at the abandoned dredge built in the 1890s in Glen Canyon by Robert Brewster Stanton. Chaffin opened a trading post there and dealt with Navajo Indians. He not only survived in this lonely and dangerous spot but prospered.

Chaffin’s home at Hite, which he built in the early 1930s, was a famous oasis of fruit trees and melons that hot, weary travelers welcomed. Its isolation, though, kept most visitors away, and Chaffin sought ways to open up that scenic corner of San Juan County to tourism.

Hite was named for Cass Hite, an earlier miner who had learned of a convenient crossing of the Colorado River at that point from Navajo Indians. The Dandy Crossing, as Hite called it, served the pack trains of explorers and cattlemen well enough, but even with a boat it was an inconvenient crossing for tourists and impossible for automobiles.

Automotive access to Glen Canyon began in 1932 when Chaffin borrowed a bulldozer from the Utah Highway Department and carved out a road infamous for its curves down North Wash to link Hanksville and Hite. Then in 1945 state funds became available to extend the road from Hite to Blanding. For the first time, Wayne, Garfield, and San Juan counties were linked by an automobile road–U-95. This was not Chaffin’s first road venture. During 1922-26, while serving on the Wayne County Commission, he was instrumental in securing a number of road improvements in the area.

Chaffin’s engineering skills came into play as he hammered together a ferry capable of floating automobiles across the Colorado at Hite. Powered by an old Ford car that he installed on the ferry and kept on course by an immense cable manufactured by Geneva Steel, Chaffin’s ferry began operation on September 17, 1946. It saw heavy use during the uranium boom of the 1950s.

In 1948 Chaffin, who had been married before and had a daughter, married Della Taylor Hickman, a widow with five daughters.

A cloud of doom hung over the Hite ferry during most of its history, for the Bureau of Reclamation’s decision to build the Glen Canyon Dam meant that the canyon would be flooded far above Hite. Chaffin fought in the 1960s for compensation from the federal government for his Glen Canyon properties but had to settle for what he regarded as far less than their true worth.

On June 5, 1964, Chaffin’s ferry made its last run. As the waters of Lake Powell slowly closed over his gardens, home, and ferry at Hite a colorful 35-year era in the history of Glen Canyon and southeastern Utah ended. Chaffin died in 1979.