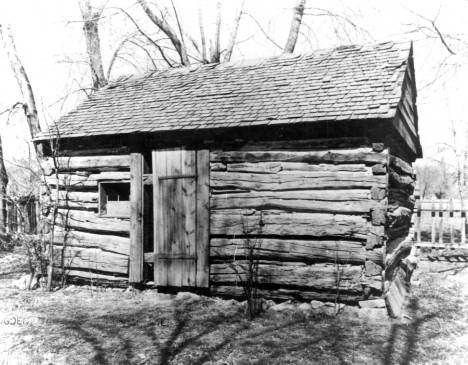 Miles Goodyear was a mountain man during the last years of the fur trade who built and occupied Fort Buenaventura in what is now Ogden, Utah. Goodyear was born in Hamden, Connecticut, on 24 February 1817 and was orphaned at the age of four. After serving much of his youth as a “bound Boy,” or indentured servant, he determined to travel west to seek his fortune. In 1836, when he was nineteen, he joined the Whitman-Spaulding missionary party traveling west on the Oregon Trail from Independence, Missouri. Goodyear was described by his fellow travelers as “thin and spare,” with “light flaxen hair, light blue eyes.” As time passed, Goodyear’s hair turned red. At Fort Hall, Goodyear decided to leave the party (which had brought the first white women west on the Oregon Trail). William H. Gray described Goodyear as he left them: “His idea of liberty was unlimited. Restraint and obedience to others was what he did not like at home; he would try his fortune in the mountains; he did not care for missionaries, Hudson’s Bay men, nor Indians; he was determined to be his own man . . . .”

For the next decade, Miles Goodyear trapped, traded, and was by all accounts a successful mountain man. By 1839 he had married Pomona, daughter of the Ute Chief Pe-teet-neet, and by 1842 they had two children, William Miles and Mary Eliza. Goodyear ranged widely across the Rocky Mountains, trapping, trading, and visiting various gatherings of mountain men and Indians, including the rendezvous of 1843. In a letter sent to his brother in 1842 Goodyear wrote that he had not yet made his fortune but did have “property, horses, beaver, and $2,500.”

As the fur trade declined and way stations such as Fort Bridger began to spring up on the overland trails, Goodyear decided to build an enclosed fort on the large westward bend of the Weber River, approximately two miles south of its confluence with the Ogden River and about one-quarter mile west of the present end of Ogden’s 28th Street. The stockade was constructed with cottonwood logs set upright in the ground that enclosed about one-half acre of land adjacent to the river. It was begun in 1845 and completed by the end of 1846. Four log cabins occupied the corners of the fort, and sheds, corrals, and a garden were also located within the enclosure. Additional corrals were located on the outside to accommodate cattle, horses, goats, and sheep. The garden was watered by river water carried by bucket to the beans, carrots, cabbages, radishes, and corn. The fort was occupied by Goodyear, his family, other trappers, Indian helpers, and visitors. It is apparent that Goodyear hoped also to use the fort as a base for trapping and trading, and he hoped also to profit from being of service to overland emigrants. Late in 1846 and early in 1847 Goodyear traveled to Fort Sutter (New Helvetia) in California to acquire some horses to trade to Oregon and California emigrants. Goodyear drove the horses as far east as Missouri in 1847, trading along the way. As he traveled eastward in the spring of 1847, he was one of the first to view the desolation the winter had brought to the Donner Party, and he and his horses followed the Donner Party tracks until he came to the Wasatch Mountains.

In July 1847 Goodyear visited with the first Mormon company traveling west on the Bear River west of Fort Bridger, and he tried to entice them to settle on the Weber River. He was unsuccessful, but in November 1847 James Brown was authorized by the Mormon High Council of Great Salt Lake City to purchase Fort Buenaventura. Brown and Goodyear agreed on a price of $1,950, and the fort, the outbuildings, and all of the animals except Goodyear’s horses became Mormon property. The settlement was soon called Brownsville and, later, Ogden.

During the next two years, Goodyear was engaged in horse-trading and gold mining in California. He acquired land at Benecia and made a rich discovery of gold on the Yuba River at “Goodyear’s Bar.” At the age of thirty-two he became ill and died in the Sierra Nevada on 12 November 1849. He was buried at Benecia, California.