By the mid-1850s LDS church leaders needed less expensive ways to move poor immigrants to Utah. The Perpetual Emigrating Fund that loaned to the needy was depleted, and costs for wagons and ox-teams were high. Therefore, Brigham Young announced on 29 October 1855 a handcart system by which the church would provide carts to be pulled by hand across the Mormon Trail. As a result, between 1856 and 1860 nearly 3,000 Latter-day Saint emigrants joined ten handcart companies—about 650 handcarts total—and walked to Utah from Iowa City, Iowa, (a distance of 1,300 miles) or from Florence, Nebraska (1,030 miles). This was, according to historian LeRoy Hafen, “the most remarkable travel experiment in the history of Western America.”

Handcarts, assembled at outfitting points in Iowa City, and then Florence after 1857, resembled carts pulled by porters in large cities. The carts had hickory or oak wagon beds and hickory shafts, side pieces, and axles. Wheels were as far apart as normal wagon wheels. Each cart carried 400 to 500 pounds of foodstuffs, bedding, clothing, and cooking utensils, and needed two able-bodied people to pull it. Five people were assigned to each cart. Adults could take only seventeen pounds of baggage, children ten pounds. Families with small children traveled in covered or family carts which had stronger axles made of iron.

Handcart company captains were men with leadership and trail experience. Each company included a few ox-drawn commissary and baggage wagons, at least one per twenty carts. Wagons or carts carried large public tents, one for every twenty people. A “Captain of Hundred” had charge of five tent groups. Five companies in 1856 and two in 1857 outfitted in Iowa City and needed a month to move 275 miles on existing roads over rolling prairie to Florence, averaging eight to nine miles per day. Passing through partly settled areas, they obtained some supplies along the way. After resting at Florence, these seven companies followed the Mormon Trail to Salt Lake City; on this stretch the first three companies spent an average of 65 days, covering 15.7 miles per day. Later companies leaving Florence needed an average of 84 days. By comparison, LDS wagon trains from Florence in 1861 needed 73 days to make the journey. The ten handcart companies were:

Pulling carts was hard, tiring work. Handcart pioneers were exposed to rain, wind, dust, and insects. Food was tightly rationed. Most made the trek safely; but the 1856 Martin and Willie companies met disaster. They left Iowa City late, in part because more people came than expected, causing delays to assemble more handcarts and tents. The two companies crossed Iowa in normal time, but repairs at Florence slowed them. Then, on the Mormon Trail, extra flour added to the carts slowed and damaged them. Expected flour at Fort Laramie never came. Short rations and lack of warm clothes drained the travelers’ energy. Severe snowstorms caught them, dropping snows up to eighteen inches deep and temperatures below freezing. Food ran out; cattle died; rescue trains from Utah had difficulty reaching the exposed and hungry sufferers. Despite heroic efforts by company members and Utah rescuers, about 200, or one-sixth of the companies, died, and dozens were maimed by frostbite and deprivation. This tragedy was the worst disaster in the history of western overland travel. Rescue wagons carried survivors to Utah over roads kept open by teamsters driving wagons back and forth to pack the snow. 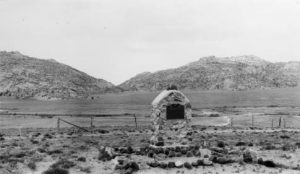 Despite the tragedy, the Mormon church did not give up on the plan. It sent a missionary company east with handcarts early in 1857, and it had sponsored five more westbound handcart companies by 1860. Overall, the ten companies proved that handcart groups not traveling late in the season were effective, efficient means of moving large numbers of people west at low cost. Low costs enabled hundreds in Britain, mostly factory and agricultural workers who otherwise might not have come, to decide to emigrate to America.

The handcart trek was an exalting ordeal for body and spirit and required spiritual stamina to complete. Sculptor Torlief Knaphus’ statue of handcart pioneers has become one of Mormonism’s best known symbols, representing the thousands of devout Saints who by cart or wagon “gathered to Zion” in Utah.