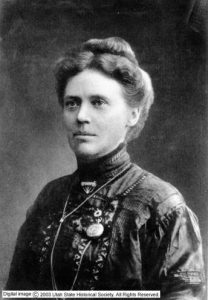 Hilda Anderson Erickson was a Mormon midwife in Tooele County.

Women’s current struggle to balance home and career may seem new. But long before the turn of the century at least one Utah woman was combining home duties with four outside careers and apparently thriving.

Hilda Anderson came to Utah in 1866 from Sweden as a seven-year-old. In Grantsville she learned early to work hard. Not yet fourteen, she took a dressmaking course in Salt Lake City and began her first career designing and sewing coats, suits, and ladies’ clothing for clients as far away as Tooele. Once her mother “jawed” her for going to a dance instead of working, but the teenager was no slouch. During one 150-day period she spent 104 full days sewing. She could turn out a shirt or boy’s coat in one day–before she acquired a sewing machine.

A bit of a coquette, Hilda kept John Erickson waiting for two years before marrying him. John had already purchased a small farm with money saved from haying for local ranchers. But when Mormon leaders called them as missionaries to the Gosiute Indians, Hilda and John left the farm behind. For the next 15 years they worked “the Church Farm” at Deep Creek, near the Nevada border, helping the Indians farm in that desert environment.

During this second career, Hilda determined that Ibapah Valley needed better midwifery. She left her infant daughter in the care of her mother in Grantsville and went to Salt Lake to study obstetrics. A year later, licensed and certified, she returned to the west desert where she delivered nearly every baby born there for the next two decades–except her own second and last child. She once traveled 25 miles on horseback to help a woman; another time she steered horse and buggy by herself over a steep mountain trail to assist at a birth. Did John worry? He had probably long since learned that his lovely auburn-haired wife would follow her own mind.

While still at Deep Creek she began her third career–as a merchant. Settlers were traveling over 200 miles round-trip to Salt Lake City for supplies. John and Hilda decided to stock at least some necessities in a small store in their own backyard. Hilda became not only manager, buyer, and clerk but also hotelier for the prospectors, railroad men, and herders whose visits to Deep Creek necessitated an overnight stay. It frequently meant working late into the night preparing knapsack lunches for the men to take with them early the next morning.

Eventually John tired of running somebody else’s farm. At first Hilda was not enthusiastic about the beautiful meadow he had discovered 30 miles down the valley, despite its willow stands and wild berries. But eventually she gave in, and John built a shed and ploughed land for alfalfa. Two years later he built a house.

Ambitious for her children to obtain a good education, Hilda never lived fulltime on the new ranch but had John build her a home in Grantsville. However, during his three-year mission to Sweden she ran the ranch herself, making day trips six or eight times a season to supervise the work. An excellent horsewoman, she loved livestock and carefully followed cattle prices as they fluctuated from $260 a head to as low as $19. She and John made good money supplying beef to work camps for the Western Pacific Railroad being built across the desert. 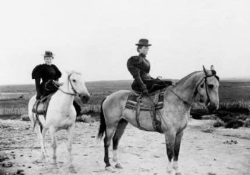 John finally sold the ranch to a passing New Yorker who took a fancy to it. Valley lore says the ranch never produced for others as it had for Hilda and John. The Ericksons retired to Grantsville where Hilda opened a general merchandise store. This time she hired a clerk and freighter, but she still kept chickens, pigs, and a cow or two in the back yard. It was in Grantsville that John passed away in 1943.

Hilda continued to serve as a Tooele County civic and church leader. As clerk for the Grantsville Farm Loan Association, she drove hundreds of miles in her Model T Ford gathering accurate data for association records. She was an avid Democrat, reading two newspapers daily and never missing a vote. She also traveled widely as president of the LDS children’s Primary organization for the county. She wore out eleven cars between 1908 and 1953, when the state finally took away her driver’s license.

In 1964 the Daughters of the Utah Pioneers touted Erickson as Utah’s “sole remaining pioneer immigrant.” She was then 104. She liked to say she had traveled by ox team, mule team, horseback, horse and buggy, wagon, bicycle, car, and–her biggest thrill–airplane. She passed away at the age of 108.