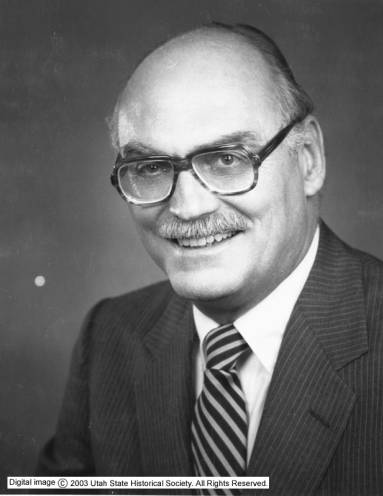 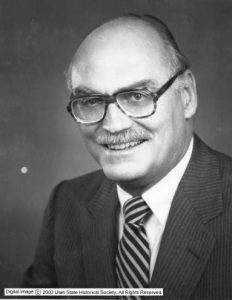 Scott M. Matheson was born 8 January 1929 in Chicago, Illinois, a son of Scott Milne and Adele Adams Matheson. He soon moved with his family to Parowan, Utah, and, when he was five years old, to Salt Lake City, where his father became Assistant U.S. Attorney for Utah. Matheson graduated from Salt Lake City’s East High School in 1946, from the University of Utah in 1950 with a degree in political science, and from Stanford Law School in 1952. On 25 August 1951 he married Norma Louise Warenski, and the couple had four children.

Following his graduation from law school, Matheson practiced law for several years in Cedar City, Utah. In the mid-1950s he moved to Salt Lake City and became Deputy Salt Lake County Attorney. He joined the legal department of the Union Pacific Railroad Company in 1958 and, except for a three-year period from 1969 to 1971 when he was assistant general counsel for the Anaconda Copper Company, remained there until 1976, when he was elected Governor of Utah on the Democratic ticket, defeating Utah Attorney General Vernon B. Romney.

Matheson succeeded Democrat Calvin L. Rampton, who had been Utah’s first three-term governor, holding office from 1965 to 1977. It was Matheson’s first elective office, although he had long been active in Democratic party affairs. Rampton probably could have been elected to a fourth term, but instead decided to return to his law practice and handpicked Matheson as his successor. A popular governor, in 1980 Matheson was elected to a second term, defeating Republican lawyer Robert Wright. Though he probably could have been elected to a third term, he did not run in 1984 and instead went into private law practice in Salt Lake City.

Hardworking, with a low-key style that served him well, Matheson generally was not identified as either a liberal or a conservative—which was an asset rather than a liability as more and more voters found less and less to identify with in the political process, and voter turnout was at its lowest point since 1942. Matheson enjoyed the mechanics of government, had a penchant for the details and forms of governmental relations, was a skilled administrator, and was often characterized as a “technician governor.”

As governor, Matheson dealt with a number of important issues. As the increasing importance of outside forces became more evident, whether they were federal government agencies, national energy companies, or powerful regional interests, he tried, more than had his predecessors, to achieve some control over Utah’s affairs. He advocated an alliance between government and the corporate community in order to encourage growth and the development in particular of Utah’s mineral resources, and he worked closely with major corporations and the Western Regional Council, which consisted of top executives from the largest corporations in the interior West and identified itself as a regional equivalent of the National Business Roundtable.

Matheson also came to oppose the deployment of the MX missile system in Utah, though he was initially in favor of it; opposed the transportation of wet eye nerve gas from Colorado to Utah’s Tooele Army Depot; supported the Central Utah Project; and initiated “Project Bold,” a proposal for land exchanges between the federal and state governments. While governor he was active in the National Governors’ Conference, served on the federal government’s Intergovernmental Task Force on Water Policy, and was chair of both the Four Corners Regional Commission and the Western Governors’ Policy Office. Scott Matheson died of cancer on 7 October 1990.

See: Robert Gottlieb and Peter Wiley, Empires in the Sun: The Rise of the New American West (1982); Scott M. Matheson with James Edwin Kee, Out of Balance (1986).