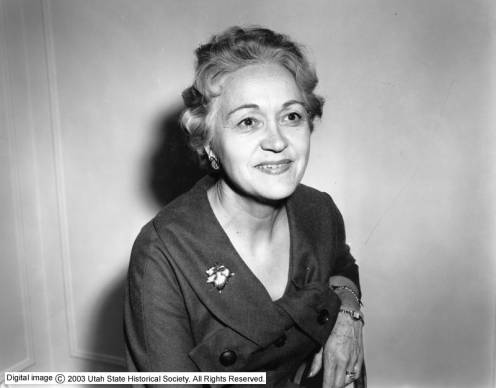 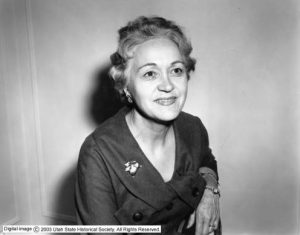 She served as Treasurer of the U.S. during Eisenhower’s two terms.

Born in Kimberly, Piute County, on September 7, 1905, to Clara Fernley and Orange D. Baker, Ivy grew up in Bingham where her father worked as a miner and her mother ran a boarding house. As a senior at Bingham High School Ivy captained the debate team, worked on the school newspaper, served on the student council, and appeared as the lead in the senior play.

After a youthful marriage that ended in divorce, Ivy worked as a telephone operator and a department store saleswoman in Salt Lake City, helping to support her family during the Depression.

Urged by her mother, an ardent Republican, Ivy began her political career by winning election as a delegate to the 1932 GOP state convention. She ran unsuccessfully for the legislature in 1934 but soon after was elected co-chair of the Young Republicans for the western states. Beginning in 1944 she served for a number of years on the Republican National Committee. She also worked at the grassroots level to organize Republican women’s study clubs throughout the state.

In 1935 she married Roy F. Priest and raised two daughters, Patricia and Nancy, and a son, Roy Jr. After her husband’s death in 1959 she married Sidney Stevens in 1961.

In 1950 she ran against incumbent congresswoman Reva Beck Bosone in a race that attracted national attention as the only one that featured two women vying for the same seat in Congress. Ivy campaigned vigorously and defused criticism that she had abandoned the traditional roles of wife and mother by asserting that it was concern over the future of her children that had made her politically active. Bosone won reelection, but Ivy collected almost 47 percent of the vote.

During the 1952 Republican National Convention Ivy demonstrated a spirited independence. The Utah delegation supported Sen. Robert A. Taft as the GOP nominee for president, and Ivy found herself “a committee of one” in favor of Dwight D. Eisenhower, a late entrant in the race. Working with other Ike supporters she was able to convince several Utah delegates to agree to switch to Eisenhower after the first ballot. When that news became known nationally other rifts in the Taft ranks appeared, and he was no longer considered a shoo-in.

Ivy became assistant chair of Eisenhower’s national campaign committee and took charge of the women’s division. She traveled across the country, working to rally women to Ike’s banner. When she saw the final election figures, she related in her book Green Grows Ivy (1958), she felt elated, ”For the number of women who voted in 1952 had increased by almost 40 percent over 1948. Women had cast a total of 52 percent of the vote that had elected the new President.”

Eisenhower rewarded her efforts by naming her Treasurer of the United States, a post she held for eight years.

In 1965 Ivy, who had become a California resident, was elected State Treasurer and served two terms. She made significant changes in the operation of the Treasurer’s office, including making it the sole sales agency of California bonds.

In addition to her political career, Ivy was active in such organizations as the National Society for Crippled Children and Adults and the National Safety Council. The Women’s Newspaper Editors and Publishers Association named her one of the 20 most outstanding women of the century. She died June 23, 1975, of cancer.