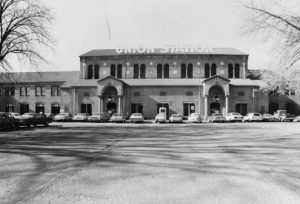 Ogden Union Station is in the National Register of Historic Places

The good times of the 1920s came to an end in Ogden, as in other parts of the United States, during the Great Depression of the 1930s. Business declined, and many companies and industries even went broke. The railroads suffered along with other businesses. Both freight and passenger traffic declined.

Thor Blair, who ran a newsstand at the Ogden Union Station, remembered that during the 1930s the trains were “sporadically” ridden by “gaunt men led by a faint hope of finding some employment” in a city somewhere along the line. Sometimes the passenger cars ran almost empty.

The 1930s were hard times, but the 1940s brought new business to the railroads as trains became a part of the nation’s military system during World War II. The railroads did their greatest volume of business carrying materials and troops for the war effort. By 1944 the total railroad volume in the United States had increased to 783 billion ton-miles of freight. Passenger travel saw similar increases, with 95 billion passenger-miles recorded in 1944. During the war American railways carried 43 million members of the armed forces in 114,000 special troop trains.

The Ogden Union Station on America’s main east-west rail line serviced a tremendous amount of this wartime freight and passenger traffic. LeRoy Johnson, a Red Cap at the Ogden Union Station for over 40 years, recalled those busy days: “At one time, during World War II, 62 passenger trains left the depot every day—streamliners from all over the nation carrying presidents, kings, ambassadors, movie stars, doctors, lawyers, authors, poets—and just people—thousands of them, every day, from all walks of life.” During that time 18 Red Caps “worked around the clock to help all these people on and off the trains.”

Tom Zito, who worked in the Ogden Union Pacific shops beginning in 1941, also remembered the war years at the station. He said the troop trains “would come in there so fast and so thick that people [would] just run around in circles. There were just too many people. Nobody knew where they were going or where they came from.”

Sometimes the soldiers passing through Ogden got off the trains to relax or have some fun, Zito said:

Boy those soldiers just didn’t care where they went, how they went or when they came back. They were just out for all the fun they could have. Some of them had no way of cleaning themselves up, they had whiskers and they were actually dirty. But then there were so many of them that they couldn’t keep the passenger trains clean because those poor soldiers would be riding for days and nights getting to where they wanted to go. They would sleep in the aisle and anywhere they could curl up and get a little rest…. much of the time … there wasn’t enough food. It was just the wildest place you were ever in around the depot ….

Some of the soldiers looked for a place to rest away from the crowds and confusion. They would just go outside in the summer time and drop anywhere they could get a little sleep. Of course they moved them out as fast as they could . . . for a long time during the war a passenger train [came] in and out of the depot every five minutes around the clock.

Angus Hansen, who worked as a carman and welder for the Union Pacific in Ogden, said of the war years, “At the time I worked there it was actually the peak during World War II. Well, they had freight and passenger train service. I don’t think you could go down to the depot anytime, night or day, that you didn’t find that depot full of people wanting to ride the trains. Of course, during the war there was a restriction put on [civilian] travel to a certain extent, because they didn’t have enough passenger trains to handle the service or military personnel.”

“The freight load was heavy, too,” Hansen remembered, “and in addition, our freight trains had an awful lot of repair work. Well, there wasn’t a time when there wasn’t four or five tracks, well four mostly, that we used for repair work. You would never find anytime that there wasn’t three out of those four that were full of bad ordered cars that needed repair.”

Lamar Belnap, who was a switching engineer for the Union Pacific Railroad, remembered the soldiers:

I was down there when the war first started. These troop trains would come in, the soldiers had been confined to the trains and were anxious to get out …. They’d head up 25th Street and find a bottle or drink …. There were a lot of troop trains going through Ogden to the West Coast. When a hospital train came in, they were marked with red crosses on the cars. The soldiers that could walk would get off the train and walk around. It was a sad deal seeing a lot of the fellows . . . on crutches and bandaged up.

When trains with unusual cargo arrived at Ogden they got special treatment. Lamar Belnap remembered trains loaded with gasoline coming into the depot. When they stopped they were immediately surrounded by armed guards to protect the cargo. Another time, a train carrying gold bullion came to Ogden. The bullion was shipped in special cars that had U. S. Army written on them. They were a short car with an extra set of trucks [wheels] under them to help support the weight. They were a kind of square car . . . only one-half the size of a regular box car. They had a little platform on the sides so the armed guards could sit on the outside and guard them, especially when they stopped. I don’t think they rode on them when they were moving…. they were very noticeable with the U. S. Army signs and warning signs all over….

During the war years as many as 120 trains a day moved through the Ogden Union Station. There were 17 tracks for passenger service. An underground passageway led from the station to the platforms so that passengers didn’t have to walk across the tracks.

The 1940s were the busiest times for the Ogden Union Station. They were also good economic times for the workers. The war years were not the happiest of times, however, because war brings with it much tragedy, as those at the station witnessed when troop trains and hospital trains arrived. Another kind of tragedy occurred when the Southern Pacific Railroad suffered a major train wreck. The Ogden depot served as the center for receiving the dead and injured.

In the early morning of December 31, 1944, a fast-moving express and mail train crashed into the rear of a passenger train, the Pacific Limited from Ogden, at Bagley, 17 miles west of Ogden on the Lucin Cutoff track. The crash killed 48 people and injured 79. Local sheriff’s officers, National Guard troops, and medical personnel came to the Union Station to meet the rescue trains. The first casualties arrived at 10:45 a.m. Some 15 to 30 ambulances lined the track to receive the dead and injured. This was the worst accident in which the Ogden depot played a part.

The railroad continued to enjoy some prosperity after the war and into the 1950s. Visitors to Ogden could still say that Union Station was a busy place. Clarence Werner, who came to Ogden in 1959 to work for the Union Pacific, remembered many passenger trains arriving in Ogden each day:

When I first started in 1959, I counted them. They were going in every direction and I worked on a lot of them in 1960. I can’t say exactly how many [ran] from here to Los Angeles or to Frisco …. Any direction you wanted to go, you could catch a passenger [train] out of here.

He remembered, too, that the trains were always full. However, the railroads were in a sharp decline. Between 1949 and 1967 railroad travel was cut in half. A few years later, passenger service was discontinued by most private railroad companies and turned over to a government agency.

The decline of the railroad business after World War II greatly affected Ogden. The Ogden Union Station, once busy and bustling with passengers, became nearly deserted. One person compared it to a mausoleum. Another said, “Now that there are no passenger trains, it’s almost deserted, with the exception of maybe one-half hour when the Amtrak comes in. There is no restaurant now, no beauty shop, no Red Cap.”

The crowds and noisy confusion of train travel during the war years have not been forgotten, though. That busy era in Utah’s transportation history played an important role in winning the war.

Endnotes: Dr. Roberts is professor of history at Weber State College. This article was extracted from a larger history of Ogden Union Station written by him.