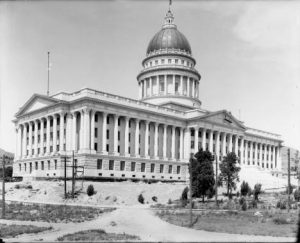 The classic simplicity and well-proportioned design of Utah’s State Capitol Building, located in Salt Lake City, Utah, have allowed it to remain as pleasing an architectural symbol of American democracy today as it was when the plans and architect were selected in 1912 in the most important architectural competition ever held in the State. Richard Karl August Kletting’s winning design, along with the nine other entries, falls into the broad category of Beaux Arts-influenced architecture. Kletting was a grand old man in Utah architecture by the time he undertook his design for the competition. He was 52 years old, and this was his last major commission. Kletting’s academic and practical training in his native Europe, coupled with his long and varied professional experience in this country, were complemented by his varied interests in city planning and community affairs.

The pioneers of Utah were anxious to build a statehouse. The first legislative assembly of the territory, which met in 1851, placed the capitol in the center of the territory and appointed a committee to proceed to Millard County immediately to designate the exact location for the new capitol building designed by Truman O. Angell, the primary designer of the Salt Lake Mormon Temple. However, central Utah did not develop as hoped, and only one complete session of the Legislature was held at Fillmore before the governmental offices were moved back north to Salt Lake City. The $20,000 appropriated for the building in Fillmore was considered wasted by Washington, and Congress refused to grant further funds for government buildings in Utah. 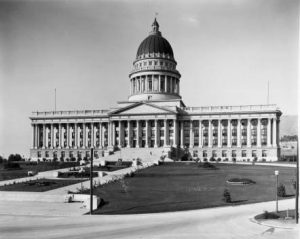 1896, when statehood finally was granted to Utah. In 1896 those scars of forty-nine years of conflict were not sufficiently healed for the idea of an architectural symbol of statehood to be addressed. An economic depression in the 1890s caused further delay. It would be ten years until the diverse groups were able to work together to plan a statehouse.

In January 1907 Governor John C. Cutler reminded the legislature that Utah had been in the union for eleven years without a capitol building. In the 1909 session three acts were passed relating to the financing of the building, and the project finally moved ahead with help from a windfall. A. R. Barnes, attorney general for the state, found a state inheritance tax lying inoperative on the books. His enforcement of this law in the estate of E. H. Harriman, railroad magnate, resulted in $798,546.00 revenue. Along with these funds, the legislature passed a bill to provide for and negotiate a loan of $1,000,000.00 and to issue bonds. The Harriman funds provided sufficient money to start the work.

Despite the excellence of the prize-winning building which resulted, the Utah Capitol competition must be considered controversial at best. Its program broke twelve of the fourteen newly announced guidelines of the American Institute of Architects, and thus became a national problem within the profession, with architects, both local and national, urging one another not to compete. Finally, Utah architects did enter the Competition, reversing their group statement that they could not and would not compete under the existing program. Several nationally-known architects also competed, at the risk of disciplinary action by their professional organization. 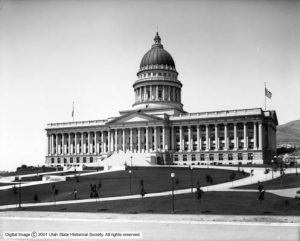 The architectural symbolism of American democracy had been developing over the previous decades, as statehouses were built. By 1911 the architectural symbols were familiar–the dome, the balanced wings for the divisions of government, and the decorative classical elements indicate the roots of that democracy in Greece and Rome. In Utah, the architect was called upon to design a building of this magnitude for $2,000,000.00. Minnesota’s statehouse, by contrast, had been completed only a few years earlier for approximately $4,500,000.00.

The exterior of Kletting’s capitol design is similar to the U.S. Capitol in Washington, D. C. The Utah building perhaps achieves some of its grandeur from the condensation of the same elements—the porticos, pediments, and monumental columns—onto the simple, but carefully proportioned, rectangle. The building is 404 feet long, 240 feet wide, and 285 feet to the top of the dome. The Utah Capitol rests on a raised, rusticated basement with monumental flights of steps leading to doors recessed behind the Corinthian columned porticos. Kletting’s was the only plan that proposed monumental free-standing columns on three sides of the building. The columns, along with the rest of the exterior, are constructed of Utah granite taken from Little Cottonwood Canyon in Salt Lake County. The dome has been called Walterized Wren, and indeed it bears a strong similarity to the dome of the U. S. Capitol by Thomas U. Walter.

Henry Russell Hitchcock and William Seale in Temples of Democracy appraise Kletting’s building: His plan was the simplest and most dramatic. Wide but not deep, its dome and its continuous range of colossal Corinthian columns echoed the national capitol. There was so little incidental decoration that the general effect was more strictly Classical than Renaissance….The Kentucky Capitol lacks the belated Gilded Age glitter of those of Idaho and Montana; all the same, it is not so grand as Kletting’s far more restrained capitol at Salt Lake City. Surveying the Great Salt Lake and ranges of mountains that fade to pink and violet in the setting sun, the Utah Capitol combines McKim, Mead and White’s simplicity with Gilbert’s taste for the spectacular.”

The plan of the first Utah Capitol selected by Brigham Young and built in Fillmore was as different from other American statehouses being built during that period as Kletting’s winning entry was similar to the then accepted concept of a state capitol building. In 1911–1912 the Utah State Capitol Commission representing both the Mormon and non-Mormon factions demonstrated Utah’s wishes to be an acceptable and cooperating part of the nation.