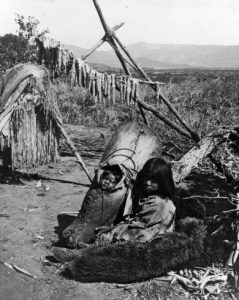 Before Spaniards Introduced Horses to the American West, the Ute Indians lived and traveled seasonally throughout Utah and western Colorado. The Ute community unit was the large, extended family. Depending on available resources, this unit might consist of three generations or more, including grandparents, parents, children, aunts, uncles, and cousins. Community activities were seasonal and involved the entire group. Several family groups would join for special activities such as war parties, religious ceremonies, and hunts. Sometimes these larger groups remained together forming villages.

But whether one group, several, or a village, the leadership pattern was similar: decentralized and non-pyramidal. No single leader governed all aspects of Ute life. Instead, natural leaders emerged for their talent in war, hunting, medicine, or religion. These leaders’ decisions were not binding, although logic and pragmatism recommended regard for their counsel. This applied to the elderly as well, who were listened to out of respect for their greater experience and wisdom rather than out of enforced power. Group decisions were made through discussion and consensus.

Use of the horse enlarged the traveling territories of Ute families. Increased mobility allowed more frequent contacts of longer duration between distant family groups. This led to the evolution of twelve major bands. Instead of family groups gathering for communal hunts, several bands joined forces. Inevitably, band leaders emerged to direct seasonal activities just as small group leaders directed family life. Greater mobility also led to more frequent encounters with enemy tribes. As a result, war leaders with expanded functions became more important to Ute society. Yet their power continued to be shared with other leaders, and they continued to lead by consensus and not by birthright or coercion.

Beginning in the late 1840s Ute land, mineral, and water rights were usurped and confiscated for white settlement. The confrontation of these two cultures, in particular the introduction of white concepts of leadership, created confusion not just between white man and Indian but between Ute chiefs.

White government was administered from the top down by a hierarchy that worked according to elaborate written codes and constitutions. Government bureaus had power to force compliance with their decisions. Early U.S. Indian agents had no understanding of the Ute vision of self-government, resulting in many blunders as whites insisted on dealing with one leader empowered to represent and make binding decisions for the entire tribe.

Driven to ever-shrinking reservations, their lives dictated by civil servants with little or no input from themselves, the Indians ultimately had to adapt. In 1927 six representatives from each Ute band elected the first Ute Tribal Business Council. The Indian Reorganization Act of 1934 allowed them to draw up a constitution and by-laws and gave them new jurisdiction over tribal lands, assets, leases, sitting.  In 1951 the first financial settlement was received on claims begun in 1938. The business council used the money for social and building programs, youth camps, land buy-backs, small business development, and per capita payments to tribal members.

In 1960 a faction of 50 “True Utes” tried to overthrow the business council, wanting to return to a traditional leadership system. But by now the majority of the tribe recognized that the complexities of modern society required new patterns.

Yet some of the flavor of traditional Ute government still operates. The council system itself means distribution of authority. In addition, Ute pragmatism may be seen in the division of council work into six departments geared to various needs and expertise; the offices of treasurer, personnel, public relations, community services, resource development, and tribal education. In addition, the annual Bear Dance and Sun Dance, which became widely celebrated during the Spanish exploration period, continue to be held each year; tribal elders still offer advice and are respectfully listened to; and the tribe meets as a whole when deciding important issues. Finally, many checks of council powers have been written into the constitution, accomplishing what may once have been done informally through courtesy. The new system is far more complicated than traditional Ute tribal government. Council leaders do not just lead hunting parties any longer but have powers appropriate to modern tribal conditions. But today’s leaders still cannot speak for their people but require the participation and assent of all the tribe’s members. Thus, while the form of Ute government may have changed, the spirit remains.