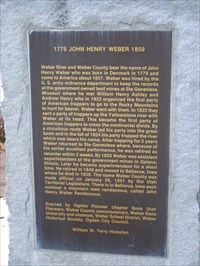 John Henry Weber was born in 1779 in Altona near Hamburg, at that time part of Denmark. By 1807 he migrated to America to Ste. Genevieve, Missouri where he became acquainted with William Ashley and Andrew Henry. In 1822 Weber enlisted in the Ashley-Henry Fur Company which departed St. Louis in the spring bound for the beaver trade of the Upper Missouri River. After reaching the mouth of the Yellowstone River, the company divided into two trapping brigades and it appears very probable that Weber commanded one of them. Certainly Weber was considered one of the most prominent members of the entire Ashley-Henry company.

For roughly the next five years, Weber’s life was occupied in the Rocky Mountain fur trade, a significant portion of which was spent in Utah. During the summer of 1824, his brigade crossed South Pass and the Green River Valley and descended upon the Bear River region for the fall hunt. As winter approached, the company journeyed to “Sweet Lake” (Bear Lake), then to the Bear River’s north bend and south to “Willow Valley” (Cache Valley). Weber’s brigade spent the winter of 1824-25 in Cache Valley on Cub Creek, near present-day Cove, Utah. Allegedly, while in Cache Valley, discussions arose concerning the remaining course of the Bear River. A subordinate of Weber, a young Jim Bridger, was selected to settle the question by floating down the river during which voyage he came upon the Great Salt Lake. For years Bridger was credited for the first discovery of the “Great Inland Sea” until more recent evidence would indicate this honor be given to Etienne Provost.

The following spring hunt found Weber’s brigade throughout northern Utah. A portion of the brigade, under the guide of a brash Johnson Gardner, confronted Peter Skene Ogden’s Snake Country Expedition near present-day Mountain Green, Utah. As a result of this dispute, Gardner was able to lure a number of Ogden’s men to leave their British employer and cause Ogden to retrace his steps back to Flathead House. That summer, Weber and his brigade were at the first rendezvous held near present McKinnon, Wyoming, just north of the Utah border.

Records are somewhat scanty regarding Weber’s remaining mountain years; however, he did spend the winter of 1825-26 in the Salt Lake Valley after Ashley’s men were forced by the winter’s severity to move their winter quarters from Cache Valley. The Weber River was so christened during this winter camp if not so designated the previous winter. From this place-name stems the names of today’s Weber University, County, Canyon, and others.

A question exists concerning the proper pronunciation of John Weber’s surname —whether it be pronounced Weeber or Webber. Those in the East and Midwest, where Weber spent most of his life, pronounce it Webber. This is substantiated by Warren Ferris’ map of the fur trade era in which he inscribes the name of the Weber River “Webber’s Fork.” There are, however, references by other fur trappers such as Osborne Russell and Daniel Potts which give credence to the long vowel sound pronunciation.

Weber attended the rendezvous of 1826 in Cache Valley, the close of which appears to mark the end of Weber’s own fur trade adventures. There is no clue as to why he left the mountains; however, it is possible that he left because of his age or because his friend, Andrew Henry, had already left the mountains the previous year. For whatever reason, John H. Weber definitely left the mountains by 1827 and spent his remaining years in the Midwest. He died in 1859.