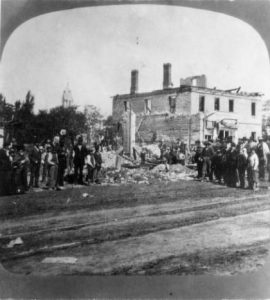 Council House, Salt Lake City (Ruins). On June 21, 1883, Salt Lake City’s most disastrous fire occurred (up to that date). It started at the rear of H. B. Clawson’s store, spread to the Council House, to Savage’s Art Gallery and to Sorenson and Carlquist’s Furniture Store.

For the first 36 years of its existence, Salt Lake City relied on the services of volunteer firefighters to protect lives and property. The volunteers strove to uphold their motto, “We Aim to Aid and Work to Save.” By the 1880s this system was insufficient for the growing city, and a professional force was created. A terrible fire in the early morning hours of June 21, 1883, proved to be the final factor in the establishment of a professional fire department.

A number of volunteer brigades were created in the early years of the city, including several established by private commercial firms. In 1853 Mayor Jedediah M. Grant signed an ordinance creating a citywide volunteer fire brigade. Along with a reorganization of the department in 1856, engineer Jesse C. Little and others constructed a small, manually pumped engine christened the Volunteer. This sturdy little machine had to be hauled by hand to the fire site, sometimes a distance of a mile or more. With several strong men laboring on its levers in relay teams, a stream of ditch water four stories high could reportedly be maintained. A severe fire in 1871 pointed up the inadequacies of the Volunteer, and a number of citizens, including Henry W. Lawrence, combined to purchase an eastern-built steam engine. When the engine arrived, however, the group found that the maintenance, housing, and motive power for the heavy engine were beyond their means, and they prevailed upon the city to purchase it from them. The Volunteer was rebuilt by the Higgs brothers and continued to see some auxiliary service.

Just after midnight on June 21, 1883, fire broke out on the premises of H. B. Clawson’s Wagon Depot in the block immediately south of Temple Square. The fire began in the southwest corner of the store in the agricultural implement department, which unfortunately was strewn with wooden crates. It quickly spread through the interior of the block, fed by a number of small wooden structures. The volunteers’ turnout to fight the blaze was severely limited by the fact that many of them were still at Black Rock beach on the Great Salt Lake enjoying a picnic. The remaining members, along with the reserves and companies formed by the Utah Central Railroad and the Walker brothers, frantically worked to contain the fire. At about 12:30 A.M. an enormous explosion rocked the scene. Charles Feveryear and Brig Randall of the #2 Engine Company were blown off the roof of the neighboring Scrace’s Bakery by the force of the blast. Windows were shattered for blocks; only two panes remained intact at the ZCMI building. The fire had reached a cache of powder that Clawson had stored (illegally) on his premises. Later estimates suggested that as many as 25 barrels of powder had exploded. Incredibly, no one was seriously injured; about a dozen received cuts from flying glass, and one man suffered a broken arm.

The fire spread to Savage’s Art Gallery next to Clawson’s as well as to the old Council House, which housed the offices of the Woman’s Exponent. A few burning embers blew across South Temple Street and ignited the roofs of the Tabernacle and the Tithing Office but were quickly extinguished. When the fire was finally doused the damage was extensive: Clawson’s and Savage’s properties were almost total losses, along with the Council House, Scrace’s Bakery, Elias Morris’s headstone shop, Sorenson and Carlquist’s furniture store, Joseph Hyrum Parry’s print shop, and Joseph Rawlins’s and Ben Judson’s shoe shops.

An official inquiry failed to pinpoint the cause of the blaze, but Clawson was widely held responsible for the explosion. It was decided, however, that his extensive personal losses precluded recovering damages from him. The volunteers officially reckoned the damage at $93,000, only some of which was insured. The volunteers also took the opportunity to petition the city for a raise in their firefighting pay. In 1879 the city had granted them 25 cents an hour for time spent fighting blazes; the united volunteers now requested 50 cents. After much deliberation the City Council decided instead to institute a paid force. George Ottinger, the last volunteer chief, became the first professional chief. On October 1, 1883, the paid department was officially established.