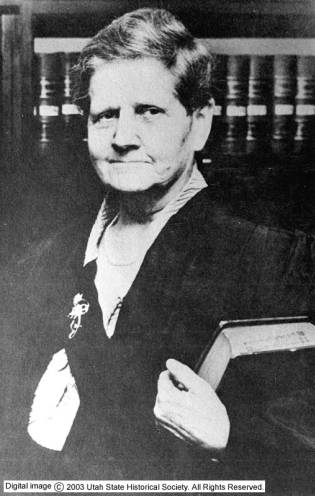 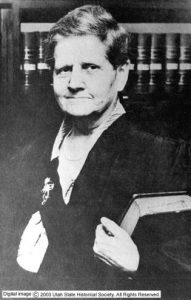 Florence Ellinwood Allen was the first woman appointed to a federal appellate court.

She was born March 23, 1884, to Clarence Emil and Corinne Marie Tuckerman Allen in Salt Lake City where her family had moved in 1881, in an attempt to cure her father’s tuberculosis. He taught at Hammond Hall, a school run by the Congregational church as part of the New West Education Movement. Florence was born in a house on the school grounds, the third of six children. Her father resigned after six years to go into the mining business and moved his family to Bingham. As a child Florence loved outdoor activities and carpentry.

Her father eventually studied law, passed the bar exam, and served in the territorial legislature in 1888, 1890, and 1894. He was elected to the U.S. House of Representatives when Utah achieved statehood in 1896. Equally active, Florence’s mother was involved in a number of organizations, including the Congress of Mothers (predecessor of the PTA), Free Public Library, and the State Federation of Women’s Clubs.

While her father was serving in Congress Florence and her two older siblings lived in New Lyme Station, Ohio, where they attended school. The family returned to Utah after two years when her father did not seek reelection. In 1900 Florence moved to Cleveland to study at the Women’s College of Western Reserve University, graduating in 1904. Then she traveled to Berlin with her mother who spoke to the 1904 International Council of Women. Florence stayed in Berlin for two years, mainly studying piano, to see if she wanted a career as a concert pianist, but she decided against it.

Returning to the United States in 1906, she taught for three years at Laurel School, an exclusive girls’ school in Cleveland. She also enrolled at Western Reserve University in a master’s program in political science. While there she decided to become a lawyer.

Although most universities did not accept women into law school then, she was able to attend the University of Chicago Law School for one year. In Chicago she became associated with Hull House Settlement and was induced by a friend to move to New York City the following year and become a social worker for the League for the Protection of Immigrants and the Henry Street Settlement.

Still, the law beckoned and she enrolled in New York University Law School in the fall of 1910. At first she worked during the day and attended school in the evening, but eventually she left social work and enrolled in law school full-time. She supported herself by lecturing at private schools and by working for the National College Women’s Equal Suffrage League.

After graduation in 1913 she moved to Cleveland. Unable to find a position with a law firm, she opened her own law office in 1914 and volunteered for the Cleveland Legal Aid Society, where she met several other idealistic young attorneys with whom she combined law offices.

Her legal career included serving as assistant county prosecutor for Cuyahoga County, Ohio, in 1919-20; as judge for the Court of Common Pleas, Cuyahoga County, 1920; and as justice of the Supreme Court of Ohio (the first woman elected to a court of last resort in the U.S.), 1922-34. In 1926 she ran in the Democratic primary for United States senator but was defeated. In 1934 she was appointed to the U.S. Circuit Court of Appeals for the Sixth District by President Franklin D. Roosevelt, the first woman to fill such a post. In 1927-38 Allen headed a three-judge federal tribunal that decided the constitutionality of the Tennessee Valley Authority.

She served for twenty-five years on the federal appellate bench, retiring in 1959 at age 75. At various times she had been considered a strong candidate for the U.S. Supreme Court. Among her legal accomplishments are several books she authored: This Constitution of Ours (1940), To Do Justly (1965), The Treaty as an Instrument of Legislation (1952), and The Ohio Woman Suffrage Movement (1952).