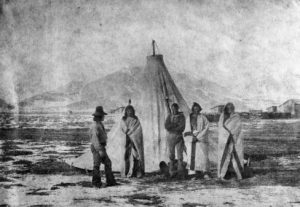 On 9 November 1858, amid gun fire and patriotic music, the soldiers of Camp Floyd, Utah Territory, raised the United States flag above their newly completed garrison. Named for Secretary of War, John B. Floyd, the post housed the largest concentration of U. S. troops to that time, in what immediately became the third largest city in Utah.

Camp Floyd was a product of the so-called “Utah War.” Influenced by rumors of rebellion in Utah, President James Buchanan ordered 2,500 soldiers led by General William S. Harney to the territory in May 1857. Colonel Albert Sidney Johnston took over the command of the Utah Expedition as Harney was retained in Kansas to direct troops in the escalating troubles there.

Extreme cold and harassment by Mormon guerrillas forced Johnston’s Army into a winter encampment called Camp Scott near Fort Bridger. Successful peace negotiations resulted in orders in the spring of 1858 for the army to march through Salt Lake City and on to a garrison site in Cedar Valley, forty miles south of the Mormon center. After a short stay at the north end of the valley, Johnston moved his men across a creek from present-day Fairfield where soldiers, aided by Mormon laborers and artisans, built Camp Floyd. 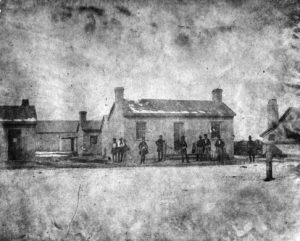 Though originally intended to be an occupying force, the army found itself virtually isolated from most of Utah’s citizens. Nevertheless, it organized its own theatrical productions, a circus, a temperance society, and a Masonic lodge (the first in Utah). During the three-year tenure of the post, the men engineered a unique watering system, planted gardens, and regularly honed their military skills through drills and instruction. Some served in brief forays against Indians in western Utah and present-day eastern Nevada. A detachment escorted the seventeen surviving children of the Mountain Meadows Massacre to Fort Leavenworth. Others guarded army paymasters and immigrant trains between Utah and California.

The most significant contribution of the army came in its assistance in improving western immigrant roads. Under the direction of Captain James H. Simpson of the Army Corps of Engineers, new routes were mapped which shortened travel time between the states and California; already existing trails were also improved. Scientists and artists accompanying the troops studied the scenery, flora and fauna, collecting specimens and sketching their findings to add to the knowledge of this newly opening area.

In 1860, after Floyd’s Southern sympathies caused his dismissal from cabinet, the post was renamed Fort Crittenden. Then, when fighting in the South escalated into the Civil War, the frontier troops were called back east to that conflict. By midsummer of 1861 Camp Floyd/Fort Crittenden was abandoned.

The government sold at auction supplies not deemed transportable, and destroyed munitions and armaments. Many local citizens benefited from the sale as provisions and other items sold at rock-bottom prices. After the army left, scavengers hauled away stones, lumber, and other abandoned items to construct needed farm buildings.

Little remains today to remind the visitor of the huge military reservation which covered nearly 100 acres, or the satellite community of camp followers known as Frogtown. Only one storehouse and the army cemetery still exist at the site of the encampment. However, many Utah families trace their roots to soldiers who chose to remain in Utah after leaving the army.