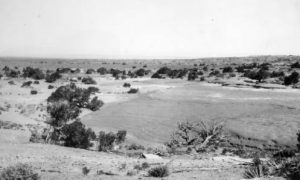 Between the Colorado, Green, and Dirty Devil Rivers lies a wild stretch of land crisscrossed with steep-walled canyons and hidden draws. For over 30 years this inhospitable terrain served as a hideout for outlaws of every description. Robbers’ Roost was a stronghold of the Wild Bunch, Butch Cassidy’s motley band of bank robbers, train stickup men, and horse and cattle rustlers.

The region probably gained its colorful name and reputation in the 1870s when Cap Brown ran stolen horses through the area. The Roost afforded hundreds of hiding spots and was difficult to penetrate, as the only easy access is via the mouth of the Dirty Devil River. A Circleville, Utah, native and grandson of a Mormon handcart pioneer named Robert Leroy Parker began using the Roost in the 1880s to hide cattle that he rustled with Mike Cassidy. Legend has it that Parker became a full-time outlaw in 1884, adopting the name Butch Cassidy in honor of his mentor.

Robbers’ Roost was one of several hideouts along what became known as the Outlaw Trail. Brown’s Hole, a rugged canyon region near the junction of Utah, Colorado, and Wyoming on the Green River, was another such hideout, along with the Hole-in-the-Wall in south-central Wyoming. The three hideouts, strung out in a roughly north-south line about 200 miles apart as the crow flies, served as temporary refuges or semi-permanent Wild Bunch headquarters in the 1880s, 90s, and early 1900s. 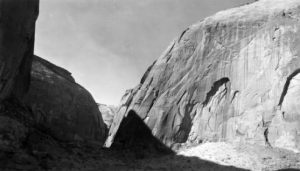 Another frequent resident of the Roost was Matt Warner, supposedly born Willard E. Christiansen to the fifth wife of a Mormon bishop in Ephraim, Utah. Warner served a cattle-rustling apprenticeship before joining the McCarthy gang along with Cassidy. The future Wild Bunch used Robbers’ Roost after a Colorado bank robbery in 1889. Cassidy used it again in April 1897 when he and another man (probably Elzy Lay) held up the Pleasant Valley Coal Company payroll. Daring robberies such as these made the Bunch notorious (and folk heroes to some), while their hard rides between their refuges were equally impressive. Cassidy was an excellent rider and always stressed the importance of strong, well-trained horses, often changing mounts at Robbers’ Roost during a long ride.

The Roost was never successfully penetrated by the authorities, despite some sporadic attempts and many boastful claims by various officials. Over the years the refuge gained a reputation as being impregnable, and stories about its defenses contributed to its legend. C. L. “Gunplay” Maxwell, a small-time bandit who reportedly yearned to join the Wild Bunch, wrote Governor Heber M. Wells from prison that the Roost was defended by a well-armed, 200-man gang with an intricate system of fortifications, tunnels, land mines, and a vast storehouse of supplies and ammunition. Few law officers cared to enter such (supposedly) dangerous ground. The Roost was largely abandoned as an outlaw hangout after 1902 when Butch Cassidy and the Sundance Kid reportedly departed on their fateful South American trip.