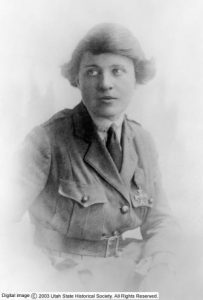 Maud Fitch won recognition for her valor near the front lines in France during World War I. A native of Eureka, she was one of many Utah women whose efforts helped the Allies succeed in defeating Kaiser Wilhelm’s war machine. Born in November 1882, Maud was one of five children in the family of Exilda Marcotte and Walter Fitch, Sr., a wealthy mine owner in Juab County’s famous Tintic Mining District.

Eager to serve her country when the United States entered the European conflict in April 1917, Maud became active in the Red Cross. For her and many other women in the United States and Great Britain that was not enough. They wanted to be in Europe where the action was and where the young men of their generation were dying. Most of the Utah women who served with the military during World War I were registered nurses. Maud was not qualified for that specialized work. When she heard that women were driving ambulances in France, however, she immediately determined to do the same no matter what it took. At first she signed on with the Woman’s Motor Unit of Le Bien-etre du Blesse (“well-being of the wounded”). The organization required her to furnish her own ambulance truck and pay in advance for a six-month supply of gas and oil. Fortunately, Walter Fitch was willing to support his daughter financially in her desire to serve. Directed by New York writer and socialite Grace Gallatin Seton, the venture seemed poorly organized to Maud when she arrived in Manhattan in mid-February 1918.

Maud sailed for France and by March 21 was living in a Paris hotel. For almost two months she waited for the Paris office of Le Bien-etre du Blesse to assign her work as an ambulance driver. To fill her time she volunteered in canteens and helped refugees. Her patience with the Seton group’s lack of organization finally wore thin, however, and she tried to find a temporary position driving an ambulance for the Red Cross so that, as she wrote her parents, she could “get into action AT ONCE.” The war seemed like a great epic to her, and any part in it was better than sitting on the sidelines, a view many soldiers shared. Maud’s own words express her sense of being part of a great human drama: “And to think at last I shall get into the very vortex of the greatest conflict in the history of the world….If only I shall have the right stuff in me to benefit by it—to go into it and come out with one’s soul and heart all fire tried!” 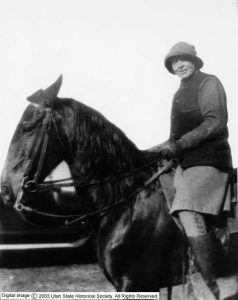 The Red Cross assignment did not materialize, but on May 15 Maud had exciting news to share with her family: A private British women’s ambulance outfit, the Hackett Lowther Unit, needed a driver. Maud was in the right place at the right time and was taken on. “Toupie” Lowther, a well-known tennis player of the time, was a member of the Earl of Lonsdale’s family; she worked in the field with the unit. The women drivers paid $30.00 a month for their upkeep. The unit was under the control of the French Third Army and supervised by a French lieutenant.

Fitch and her companions drove their ambulances north of Paris in a long convoy of troops headed toward the heart of the German army’s spring offensive. Their first quarters were near Compiegne, an area being shelled by the Germans. Maud vividly described her night rescue of five wounded soldiers on May 30. In a scene of utter confusion, with troops, cavalry, and trucks filling the road, she bribed those directing the traffic with cigarettes to let her ambulance through. Shells had destroyed directional signs in the town square, but she eventually located the hospital. She was back home by 2:30 A.M. and fell instantly to sleep in the back of an ambulance. By 6 A.M. she and her companions were awake. They “breakfasted on nothing and washed some layers of dust off, then strolled about the hills with the guns at the front hammering in our ears.”

Ten days later, on June 9, she accomplished a daring rescue of wounded under heavy fire. She played down the experience in her letters home, but for her bravery she received the French Croix de Guerre. Later, a gold star was added to her medal.

Wounded men were typically taken on stretchers to first aid stations near the front lines. Maud and the other Hackett Lowther drivers picked them up there and took them to the nearest hospital. Maud thrived on this dangerous “frontwork.” Another typical assignment was “back evacuation” from a hospital near the front lines to one farther back—work, Maud wrote, “one prefers not to do unless one’s nerves have begun to get taut from frontwork.” Sometimes the hospitals were so crowded, especially near the fighting, that they would not accept any more patients. Maud worried about the pain her wounded suffered when she had to drive them 40 to 50 kilometers over poor roads to a hospital behind the lines.

Despite many 24-hour shifts and considerable off-duty time spent repairing their vehicles, the women were able to indulge in practical jokes, pillow fights, and swimming in one of the many streams in northwest France to ease the tension. They also enjoyed associating with the French officers and men, sharing food, dancing, and enjoying casual conversation between battles. On one occasion a French artillery crew allowed Maud to fire its 75 mm field gun toward a German position. She also drove a French colonel, surprised and delighted by his female chauffeur, to his new assignment on the front lines.

Following the war Maud returned to Eureka, married, and had one son. Years after her death in Los Angeles at age 91 oldtimers in Eureka still recalled her heroism during World War I and her devil-may-care attitude behind the wheel in her later years.

For Maud Fitch, driving an ambulance in the war zone was the experience of a lifetime. Her many detailed letters home constitute a remarkable firsthand account of World War I.