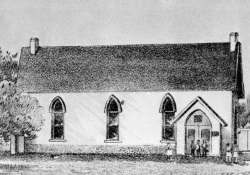 In 1864 trustees of the American Home Missionary Society decided to expand the Society’s evangelical efforts into the Far West. The Reverend Jonathan Blanchard was sent to survey Montana, Idaho, Utah, and Colorado. He was impressed with the possibility for missionary activity among the Mormons and received strong support for the venture from Patrick E. Connor, the commanding officer at Camp Douglas, a Catholic. Action came rather quickly, considering the slowness of travel before the transcontinental railroad. The Reverend Norman McLeod, a Congregational minister, arrived in the Utah capital on Monday, January 16, 1865. He had previously worked in New England, Minnesota, and Canada and claimed to have met LDS Apostle John Taylor when he (Taylor) was a Methodist minister in Canada, prior to his conversion to the Mormon faith. McLeod had been serving in Denver when the Missionary Society advised him to leave his congregation in the care of an assistant and proceed at once to Salt Lake City. He was warmly welcomed by Connor, who hoped to secure the post of chaplain at Camp Douglas for McLeod. That would, of course, make the minister immediately self-supporting.

McLeod, with much encouragement from the city’s non-Mormons, began the formal organization of a church with a board of 12 trustees and a constitution. He conducted services both morning and evening in the city and in the afternoon at Camp Douglas. Soon two Sunday Schools had been organized as well. In a letter to the Missionary Society he stated that 17 individuals had pledged to organize “The first Church of Jesus Christ (Congregational) in Utah.” He estimated an initial membership of 20, including three physicians. By mid-February 1865 the church was not only organized, but the trustees had initiated plans for a church building and were already raising funds for its construction.

The proposed church building—which would eventually be called Independence Hall–would be the largest and most important non-Mormon building in Utah for a number of years. One member of McLeod’s small flock, a Mr. Ellsworth, traveled to the East to solicit funds for the structure, and McLeod himself visited northern California where he succeeded in raising some $2,000 from Congregationalists in that area. With those funds he bought a lot on the south side of Third South, west of Main Street. Independence Hall was dedicated on November 26, 1866. It had cost $7,500 to build; a debt of $1,200 for its construction was not paid off until 1876.

Hoping to find more contributions for his missionary work in Utah, McLeod traveled to the East in late 1865. By then he had become an ardent foe of Mormonism and testified before a congressional committee where he urged the federal government to end Mormon dominance in Utah Territory. By the time McLeod had completed his rounds in the East in 1867 and was preparing to return to Utah, he received word in Fort Leavenworth, Kansas, that his Sunday School superintendent, Dr. J. King Robinson, had been murdered in October 1866—perhaps the most notorious unsolved crime in the city during the territorial period.

McLeod delayed his return to Utah and his small congregation evidently did not survive his absence, but in a sense he had already made his most important contribution to Utah history in the building of Independence Hall. The Episcopalians took over the Sunday School and rented the hall from the Congregational church. They used the building for their church services and also established St. Mark’s School there in 1867. In turn, Bishop Daniel S. Tuttle of the Episcopal church let the Methodists use Independence Hall for their church services until they built a church building, and when St. Mark’s School moved to another location in 1870 the Methodists set up their Rocky Mountain Seminary in the hall. Later still the Congregational church returned to the site and used it as a church until 1890 and also housed their Salt Lake Academy there. Additionally, many non-Mormon meetings of all kinds were held in Independence Hall.

As for McLeod, he returned to Salt Lake City and assumed duties as post chaplain at Camp Douglas and also began preaching at services in Independence Hall. According to Catholic historian Robert J. Dwyer, McLeod’s preaching consisted largely of attacks against Brigham Young, polygamy, and the Mormon hierarchy. Perhaps his small flock tired of these harangues, for by October 1872, after six months at the pulpit, he had failed to gather a congregation—many of his former adherents had evidently joined the Presbyterian church—and he stopped preaching in town. He did, however, continue his diatribes at Camp Douglas at least until June 1873, after which he faded from the Utah history record.